For the first time in company history, the Met presents the original five-act French version of Verdi’s epic opera of doomed love among royalty, set against the backdrop of the Spanish Inquisition. Patrick Furrer leads a world-beating cast of opera’s leading lights in this March 26 performance, including tenor Matthew Polenzani in the title role, soprano Sonya Yoncheva as Élisabeth de Valois, and mezzo-soprano Jamie Barton as Eboli. Bass-baritone Eric Owens are Philippe II and the Grand Inquisitor, and baritone Étienne Dupuis rounds out the all-star principal cast as Rodrigue. Verdi’s masterpiece receives a monumental new staging by David McVicar that marks his 11th Met production, placing him among the most prolific and popular directors in recent Met memory. This live cinema transmission is part of the Met’s award-winning Live in HD series, bringing opera to movie theaters across the globe.

Timeline for the show, Don Carlos 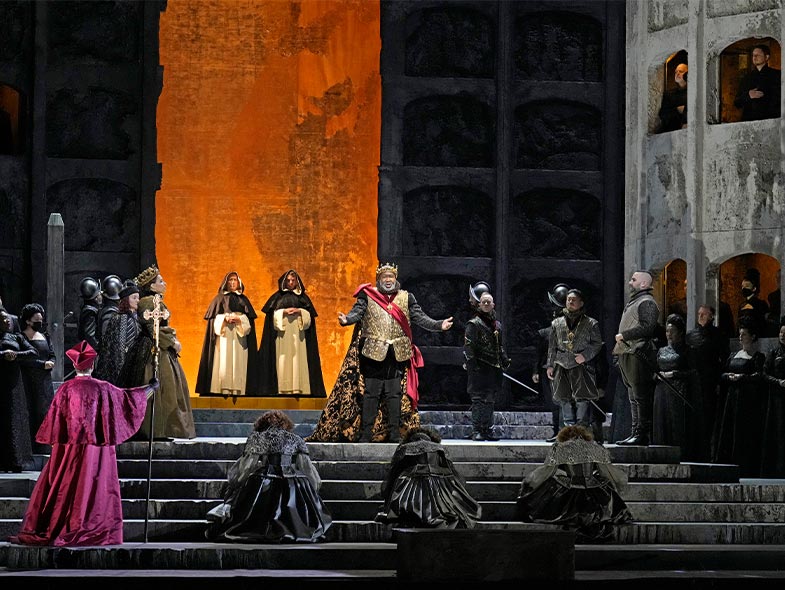 World premiere: Opéra, Paris, 1867
Verdi’s longest and most ambitious opera—which appears this season in its original, five-act French version—offers a profound look at the intersection of the personal and the political spheres. The opera features a number of complex one-on-one confrontations, and the chorus, when it appears, is imposing, most notably in the central auto-da-fé. The grandeur of the score telescopes in Acts IV and V to the individuals, with magnificent and melodically rich solo scenes.

In a remarkable career spanning six decades in the theater, Giuseppe Verdi (1813–1901) composed 26 operas, at least half of which are at the core of today’s repertory. Don Carlos’s libretto is by François Joseph Méry (1797–1865), a notable Parisian playwright, and Camille du Locle (1832–1903), who completed work on Don Carlos after Méry’s unexpected death. It is based on the 1787 play Don Karlos by German poet, philosopher, and historian Friedrich von Schiller (1759–1805).