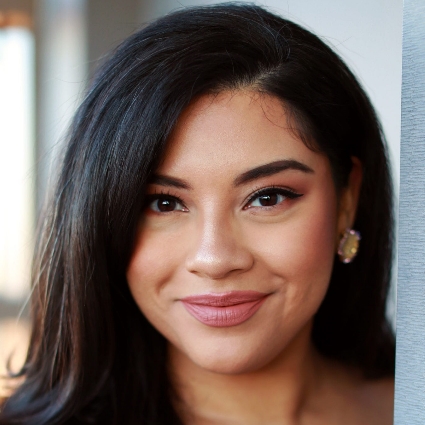 Nicaraguan-American soprano Gabriella Reyes will sing Liù in Turandot and the First Lady in The Magic Flute during the Met’s 2019–20 season. She made her company debut in the Met’s Summer Recital Series last summer and made her house debut singing the Priestess in Aida in 2018, appearing as Nella in Gianni Schicchi later that year. In 2017, she sang the First Lady in excerpts from Die Zauberflöte with the Los Angeles Philharmonic, led by Gustavo Dudamel, at the Walt Disney Concert Hall and also debuted as a soloist with New York Choral Society and in Beethoven’s Symphony No. 9 with the New Haven Symphony Orchestra. She has since returned to the New York Choral Society for Tippet’s A Child of Our Time at Carnegie Hall.

A grand finalist in the 2017 Metropolitan Opera National Council Auditions, she was recently named as one of Lincoln Center’s 2019 Emerging Artists. She is also a 2018 recipient of Sara Tucker Study Grant from the Richard Tucker Music Foundation and the 2019 recipient of the Hildegard Behrens Foundation Award. In the summer of 2019, Gabriella made her debut at the Santa Fe Opera singing Musetta in La Bohème. She received her bachelor’s degree from Boston Conservatory.