In the late 19th century, archaeologists working on the banks of the Nile made a remarkable discovery: some four hundred fragments of letters addressed to a pharaoh named Akhnaten. The significance of the find was unmistakable, but who was this mysterious pharaoh? Unlike other Egyptian leaders, whose towering pyramids, richly decorated tombs, and exquisite temples left an indelible mark on Egypt’s landscape, Akhnaten was cloaked in mystery. As archaeologists dug into this forgotten pharaoh’s legacy, they unearthed a series of religious and social reforms so bold, so counter to ancient Egyptian traditions, that his successors felt compelled to erase all traces of his reign.

In 2019, Philip Glass’s landmark opera Akhnaten received its Metropolitan Opera premiere. Directed by Phelim McDermott, the Met’s production offered a mesmerizing mix of ancient imagery and modern stage spectacle. Yet McDermott made clear that the production was not intended to authentically represent Akhnaten’s life. Instead, McDermott explained, he hoped to “create a mythical, dreamlike version of ancient Egypt,” one that “communicates what it was like for people in the early 20th century to rediscover this ancient world.” Star countertenor Anthony Roth Costanzo agrees. “This production offers us a view of Egypt like it would have been imagined in 1922, when English explorers found Tutankhamun’s tomb,” he explains. “It’s a representation of fantasies about ancient Egypt, mixed with images inspired by real ancient artifacts. So what you see is a creative depiction of history.”

This guide takes the idea of a “creative depiction of history” as its jumping-off point, inviting teachers and students alike to ask: How do we construct narratives about the distant past? What can modern art teach us about the ancient world? And what can archaeological discoveries teach us about the modern age? As this guide delves into Akhnaten’s music, drama, and design, it will invite students to explore a variety of methodologies for studying history, literature, art, and the complex worlds of both the past and the present. 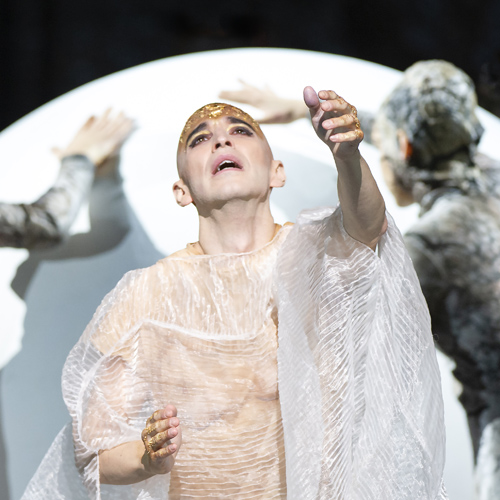 The Composition of Akhnaten

A Conversation with Anthony Roth Costanzo

The Book of the Dead

Archaeological Insights from the Dustbin of History