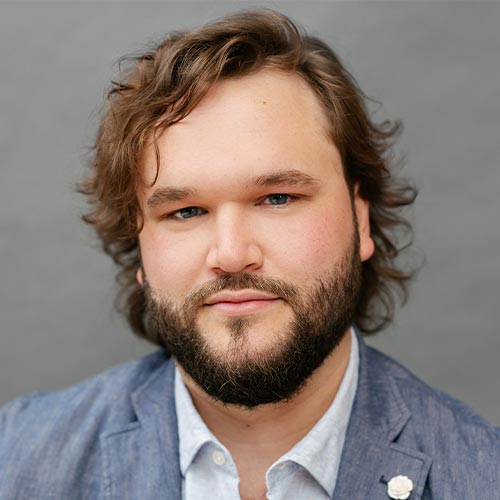 Originally from Toronto, tenor Matthew Cairns is in his first year in the Lindemann Young Artist Development Program and was a Grand Finals winner in the Met’s 2022 Laffont Competition. This season, he makes his Met debut as the Messenger in Aida and covers Bob Boles in Peter Grimes. Later this season, he will sing Macduff in Macbeth at the Canadian Opera Company and Don José in Carmen at Des Moines Metro Opera.

A former member of the Canadian Opera Company Ensemble Studio, he appeared as the Prince of Persia in Turandot, the Witch in Hänsel und Gretel, and the Gamekeeper in Rusalka and covered the role of Alfredo in La Traviata. Previously, he performed both Don Ottavio in Don Giovanni and Gherardo in Gianni Schicchi with the Centre for Opera Studies in Italy, Liberto in L’Incoronazione di Poppea at Opera Theatre of Saint Louis, and Detlef in Romberg’s The Student Prince at the Chautauqua Institution, where he also placed first in the Sigma Alpha Iota Competition. He was a finalist in the 2022 Neue Stimmen Competition, the first prize winner in the 2018 Canadian Opera Company Ensemble Studio Competition and winner of the Canadian Broadcast Corporation’s Music Young Artist Development Prize. In 2019, he was named one of CBC’s “30 Hot Classical Musicians Under 30.” He holds a master’s degree in from the University of Toronto.