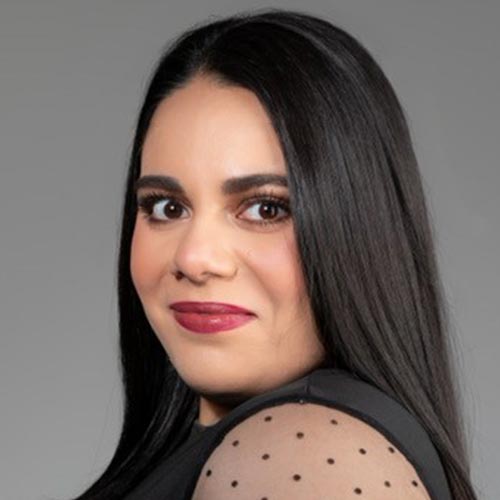 Amanda Batista is a Cuban American and Puerto Rican soprano from New Jersey currently in her first year in the Lindemann Young Artist Development Program. This season at the Met, she will cover Clotilde in Norma and sing the Priestess in Aida. Last summer, she sang the title role of Catán’s Florencia en el Amazonas with the Merola Opera Program and Salud in de Falla’s La Vida Breve in the Schwabacher Summer Concert Series.

During the 2021–22 season, she made her Alice Tully Hall debut as part of Juilliard’s Songfest, won second place in Houston Grand Opera’s Eleanor McCollum Competition, and made her Juilliard Opera debut as Frau Fluth in Nicolai’s Die Lustigen Weiber von Windsor. She made her role debut as the Countess in Le Nozze di Figaro at the Chautauqua Institution and appeared as a featured soloist in Lincoln Center’s Restart Stages outdoor recital series at the Club at Hearst Plaza. Previously a mezzo-soprano, she performed several roles with Opera Theater Rutgers, including Nicklausse in Les Contes d’Hoffmann, Florence Pike in Britten’s Albert Herring, and Marcellina in Le Nozze di Figaro. She holds degrees in music from the Mason Gross School of the Arts at Rutgers University and the Juilliard School, where she was a proud recipient of the Kovner Fellowship.

Amanda Batista’s participation in the Lindemann Young Artist Development Program is sponsored by The Elroy and Terry Krumholz Foundation.