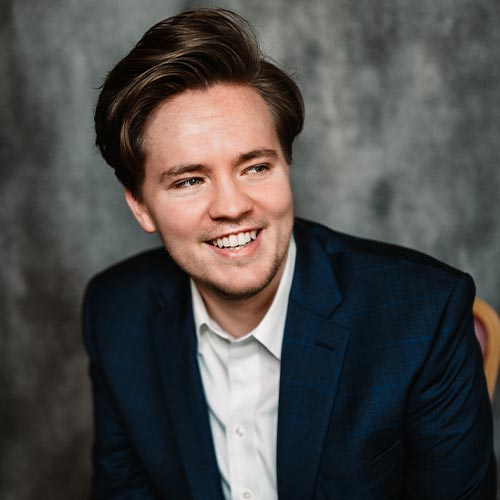 Jonah Hoskins is a tenor from Saratoga Springs, Utah. Since winning the Metropolitan Opera National Council Auditions in 2020, he has been a member of the Lindemann Young Artist Development Program and will make his Met debut this winter in Massenet’s Cinderella as the Dean of Faculty. Next March, he will perform Count Almaviva in Rossini’s Il Barbiere di Siviglia with Pensacola Opera.

He has received awards in multiple national and international competitions, most notably Operalia, where he will compete later this year. He also received the top prize in the National Opera Association’s competition and was a finalist in the Lotte Lenya Competition.

From a young age, he has been passionate about opera, making his operatic debut as the First Spirit in Mozart’s The Magic Flute. Some of his more recent roles include Fenton in Verdi’s Falstaff, Rinuccio in Puccini’s Gianni Schicchi, Tamino in Mozart’s Die Zauberflöte, and Septimius in Handel’s Theodora.

He made his professional debut with Utah Opera as Benvolio in Gounod’s Roméo et Juliette. Last summer, he covered Don Curzio in Mozart’s Le Nozze di Figaro and Flute in Britten’s A Midsummer Night’s Dream with the Santa Fe Opera. In summers past, he participated in the young artist programs of Des Moines Metro Opera and Ohio Light Opera, and Houston Grand Opera’s Young Artist Vocal Academy.